The Heart of Central France

We may think that only Paris and the coastal areas of France are of interest, but think again! There’s a lot to see in the heart of Central France, known by the French as “la France profonde”, or deep France.

During your road trip toward the coast or Provence, you’ll likely pass some of these towns: Bourges, Montluçon, Limoges, Angoulême, and Poitiers. They make great detours as you cross the center of the country. In this post0, they are arranged from north to south. 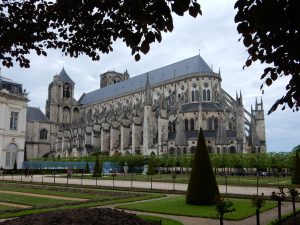 Bourges, a medieval city, is located south of the Loire Valley. It has a grand 13th-century cathedral, unique in design, with lovely flying buttresses. Climb the Tour de Beurre for a panoramic view. In the Old Town, you’ll find quaint, half-timbered buildings, where once lived the wealthy merchants during the prosperous 15th and 16th centuries. Several museums are housed in gorgeous Gothic buildings, and you won’t lack parks and gardens, either.

Montluçon is the second-largest city in the Auvergne region. It lies on the Cher River northwest of the larger Clermont-Ferrand. Like Bourges, the Old Town is filled with half-timbered houses. Romanesque churches and the Chatêau of the Dukes of Bourbon (with its unusual architecture) will give you points of interest. Mupop is a French music museum with a fascinating history and beautiful instruments. 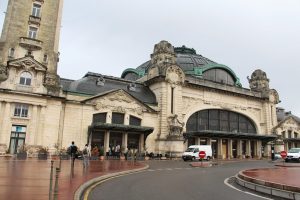 Train station in Limoges, another work of art!

Limoges. If you know anything about porcelain, the name Limoges will ring a bell. Its porcelain is known around the world. In Limoges, you can visit the French national museum of porcelain, called the Musée National Adrien Dubouché. There are over 300,000 pieces to see from around the world and many historical eras. Make sure you wander aimlessly around the Quartier de la Boucherie, a medieval neighborhood where a butcher’s guild used to be. After lunch in the shadow of half-timbered houses, take a stroll through the Jardin Botanique de l’Evêché or visit the covered market. And of course, don’t forget to buy a Limoge porcelain souvenir (or two!) 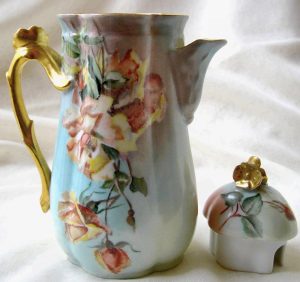 Angoulême is a good-sized city (if you include its suburbs) that lies between the Loire Valley and Bordeaux.  It sits on a rocky ridge over the Charente River. The most notable feature of the city’s cultural life is the Angoulême International Comics Festival, held each January, in addition to a French film festival. Between festivals, comics and animation still maintain a strong fiber in the city, since it provides 40% of the nation’s animation and comics. There’s a 12th-century cathedral filled with sculptures to see, the Comics Museum (Musée de la Bande Desinée), comic figures around in the streets, and hiking on the terraces and ramparts of the city. 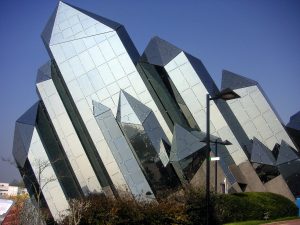 Poitiers is a mid-sized town in west-central France. You may pass by it if you’re on your way by car to Bordeaux or the Dordogne region in southwest France. Its Old Town is worth a look, with winding medieval streets flocked with half-timbered houses (yes, more of those!) Very picturesque. Notre Dame la Grande, a Romanesque Byzantine church, is one of the oldest in France, dating from the 11th century. There are light shows against its intricate façade in summer and at Christmas. On the other side of the spectrum, is the very odd futuristic architecture of Futuroscope. This theme park is memorable for the whole family, with multimedia and cinematography as well as other techniques on display. For a calmer day, seek out one of several parks and botanical gardens.

So, you see, the central part of France holds as much interest as any other region. Put it on your next road trip itinerary!