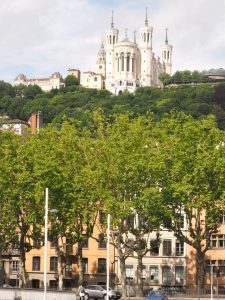 You’ve heard of Lyon, France, and maybe changed trains there. That was my only experience with Lyon, until recently. Many people told me how nice a city it is, how good the food, how much there is to do. I had to visit it for myself.

Lyon is a sprawling city, the third largest in France. There are a half million people, and more in surrounding suburbs. It’s also known as the second gastronomic capital of France, after Paris. And your stomach and palate can verify that claim! 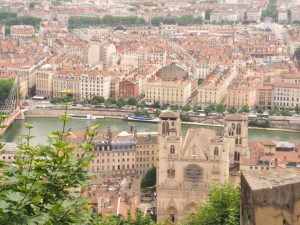 Historically, Lyon is known for the silk trade. Several museums show you the history of the trade and also how things are made. I visited one (Soierie Saint Georges) whose only customers are the 40,000 châteaux all over France which need renovations of silk furnishings on a regular basis. Another I saw does screen prints of silk fabric. Most are now in the Croix Rousse district in the north part of the peninsula.

Much of what you want to see is going to be in Vieux Lyon, the old part of town, and on the peninsula just to the east, a narrow slice of land that lies between the rivers Saone and Rhône. There you’ll find shopping, many restaurants, and the big city buzz. Keep going east and you’ll find a larger urban center where most people and companies are, as well as two train stations, bus routes, and the tram. Lyon does have arrondissments, or districts, like Paris, though unlike Paris, they are not in any order. You can get tickets for 24 or 48 hours that cover tram, bus, and metro. 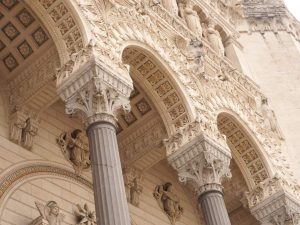 Highlights of Lyon Not to Miss 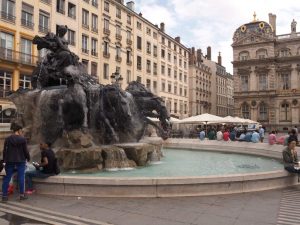 The helpful tourist bureau is located at the Place Bellecour, in the southern end of the peninsula. They can give you detailed maps and tons of additional ideas for your visit to Lyon!