Dinan: A Treasure in Brittany

Dinan is my favorite town in Brittany. In fact, it was the first post I wrote for Oliver’s France. Enjoy it again and make plans to go!

There are many rolling hills and peaceful landscapes in Brittany. Even here in the midst of this lush, unspoiled land, there are towns that require a visit. Dinan is one of these. It is about 4 hours by train from Paris, and around an hour from St. Malo and Le Mont Saint Michel. If you are already in one of these cities, you can’t neglect Dinan. And if you’re not, Dinan deserves a special trip. 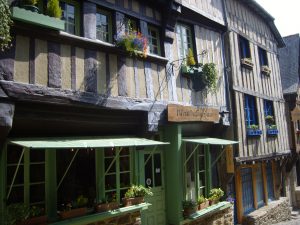 In Dinan, there is a lot to see and do, yet you can relax as well. In a nutshell, you’ll make memories here, climbing castle walls, passing by 700-year old buildings, eating lots of crêpes and Kouign-Amann. There is plenty to do, places to stay and eat, and more beauty and history than you can handle!

The flavor of Dinan is decidedly medieval, as the worn ramparts surrounding the town testify. You can clamber along some of these castle walls and bridges, and after that stroll on narrow, cobbled streets past shops, crêperies, and half-timbered buildings. Some of these structures are bigger on the top than the bottom, since in those days people were taxed based on the street-level size of the dwelling.

The hub of the town is called the Place des Merciers. Stand here and look around, imagining you are in the 1600s.

The Tourist office is located at 6 rue de l’Horloge, in a 16th-century house. This might be a good first stop since they can orient you with an overview. Maps with color-coded paths will help you choose what you’d like to do. 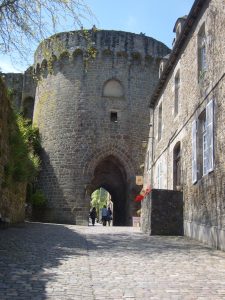 The Rance River flows through the lower side of the town, but you have to go down, down Rue Jerzual, a steep, cobbled road with shops on either side. On the way, you’ll pass the Maison du Gouverneur (Governor’s house), one of the oldest buildings in town, which is open to the public for visits.

When you arrive at the port you’ll be rewarded by an idyllic river valley, with a row of cafés along the tree-lined river.

Things to do in Dinan

You’ll need to allow a minimum of one FULL day, but two to three is much better to see everything, hike and eat your way through history, and connect to the medieval ambiance. 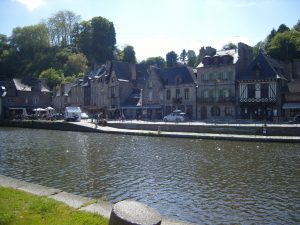