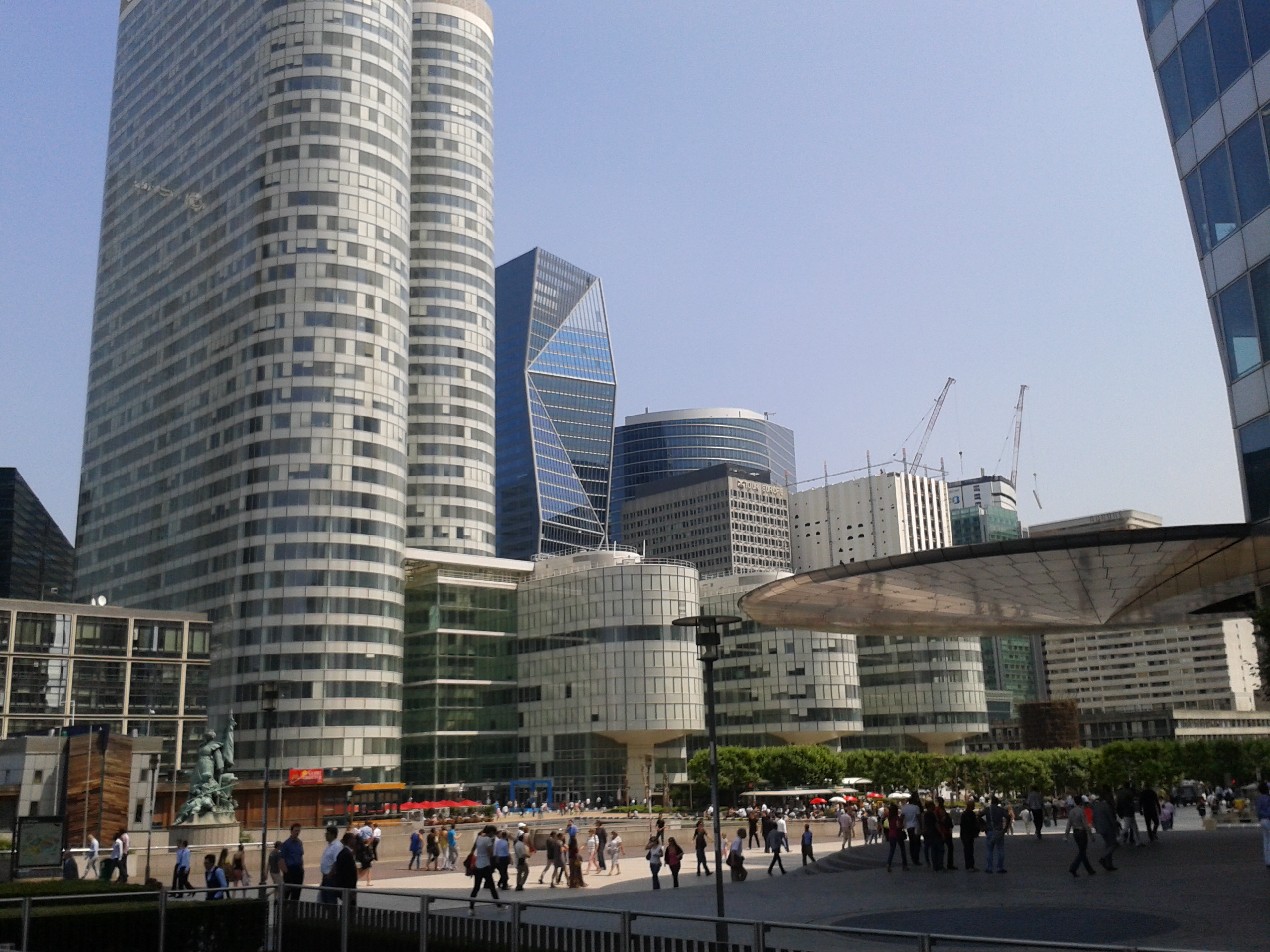 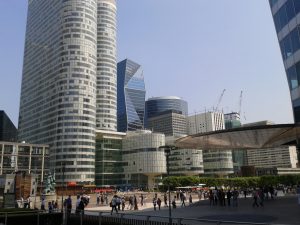 Looking out from the Eiffel Tower to the west, you’ll see a far-away cluster of skyscrapers. You might wonder if a mini New York City was transplanted there. No, it’s La Défense.

If you’ve taken public transportation in Paris, you’ve likely seen the words as a stop on the RER train or the Line 1 Métro, a station flung out to the extreme west of the city. What is La Défense? A neighborhood? A monument? Well, sort of… both.

First, La Défense is a business district covering about 1400 acres. Many of Paris’ highest buildings dwell here. There are 1500 corporate head offices, and 180,000 employees work in 37 million square feet of office space in this futuristic community.

I had the opportunity to teach English in one of the big companies in La Défense. Each time I took the RER westward and got off among throngs of suited-up workers carrying briefcases, etc., I emerged into a different world. You have to admit, the French are aesthetic and creative. You’ve never seen an office park like this one.

Though it isn’t primarily residential, there are a few apartment buildings, with more springing up. In fact, there are nearly constant waves of construction going on, in a variety of styles from different periods. 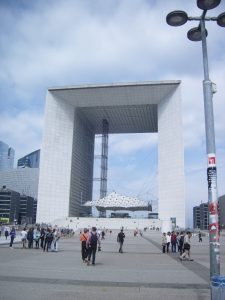 The name La Défense actually did come from a monument (how French, don’t you think?), a statue called La Défense de Paris (the defense of Paris) which commemorates soldiers who defended the capital during the Franco-Prussian War of 1870. Later the statue was transported to this growing business mecca.

The most striking architectural feature is the Arche de La Défense, a modern counterpart to the Arc of Triumph. If you stand under the La Défense Arche, also known as La Grande Arche, you are on a parallel line with the Arc de Triomphe, which is a kind of western doorway to Paris. The La Défense arch was completed in 1989 and houses government offices and a computer museum (currently closed to the public).

There aren’t only office buildings at La Défense. You’ll find parks, fountains, and landscaped areas. In order to feed so many hungry employees, there is a stunning variety of restaurants of all kinds, in all directions. It’s also possible to buy a fast meal at one of the food trucks and listen to an outdoor noontime concert. Scattered throughout the mini-city there are 60 outdoor sculptures from 50 artists from 14 nationalities. 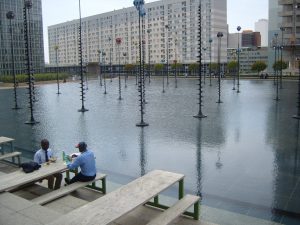 Industries et Technologies, housing offices, chic shops, and more restaurants. Le Quatre Temps is a huge shopping mall which, at the time it was built, was the largest in Europe. You can find everything there.

It’s worth a visit to La Défense for the other-worldly experience of the layout and architecture. The huge buildings, fountains, terraced stairways, and landscaped spaces are artfully arranged with sculptures, restaurants, and wide-open plazas. 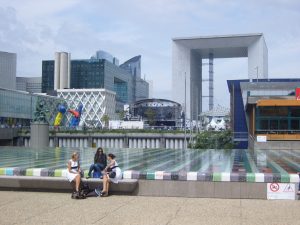 Getting to La Défense is easy: take Line 1 or the RER A almost to the end and make sure you get off at La Défense. Head to the Le Parvis or just follow the crowds. (Be careful on the RER A, because this train has several branches going in different directions.)