Brittany Charm: 8 Towns You Must See

If you’re looking for charming villages and memorable places in France, go to Brittany and you’ll never run out. I won’t say these are the best, since dozens will vie for that place. But these are all worth a serious visit!

As you may know, Brittany is a large peninsula jutting out from the northwest corner of France into the Atlantic. We’ll see a few of these wonderful spots on the north coast and nearby, then move to the south. You’ll be taking notes for your next trip before you’re finished reading!

The North Coast of the Brittany Peninsula 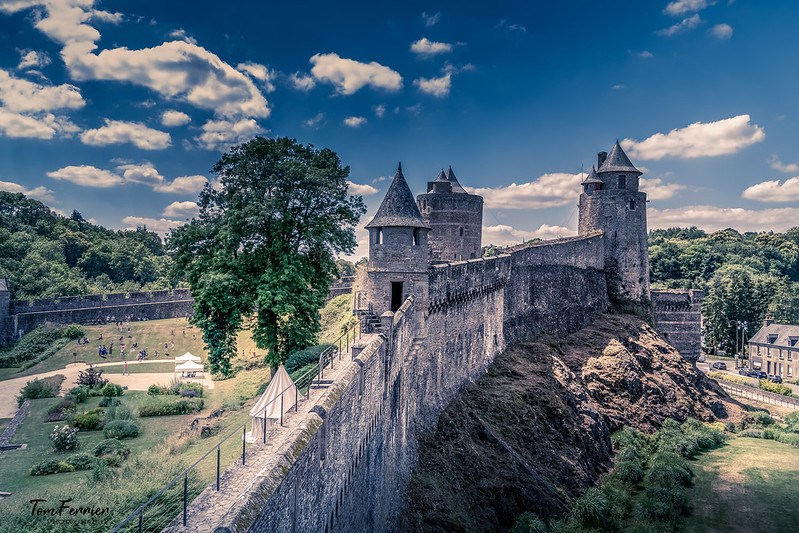 We’ll start our visits in Fougères, close to the Normandy border. It’s not on the coast, but not far, either. Fougères is a remarkable example of medieval architecture. The amazing 12th-century castle is a main feature of the town, with 13 towers and ramparts which you can walk on to get a view of the town. To the south of the castle, you’ll find the old town, including the popular Place du Marchix, with half-timbered houses. A newer part of the town exists on the other side overlooking the castle. You’ll see the 14th-century belfry, one of the oldest in Brittany. Another belfry in the St. Léonard church is open to the public in summer for wonderful views. 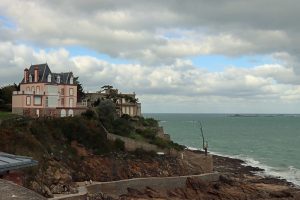 Heading up northwest to the coast, you’ll encounter the town of Dinard, which has a different flavor than others in this post. It’s on the water and is a popular seaside destination for those wanting to enjoy its beaches and sunny weather. It’s a bit like the St. Tropez of the north, but smaller! You’ll find casinos, restaurants, and luxury hotels, as well as scenic beaches and a coastal walk on a path overlooking the water. There you’ll also see examples of architecture from the Brittany and Normandy coastal region.

A short drive from Dinard is St. Malo, which has its own post, and Dinan, my very favorite destination in Brittany (also has a full post.) Further up the coast is an area called the Pink Granite Coast, where you’ll find many intriguing villages and beach towns.

The South Coast of the Brittany Peninsula 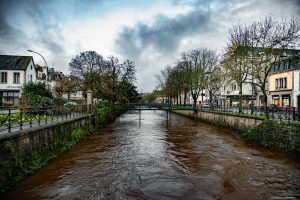 Starting in the far west in the region known as Cornouaille, is the town of Quimper, a mid-sized town that’s a popular tourist destination. The Celtic influence is evident in the old town and along the ancient streets of half-timbered buildings and footbridges over the river. Visit the 13th-century cathedral with its unusual façade and taste some crêpes from one of the many shops. Quimper faience is a famous, traditional type of pottery made in Quimper since 1690.

Not far away is another small village worth seeing, Locronan, voted one of the prettiest villages in France. It’s small, but takes you back in time, with lovely granite buildings and historic charm. It’s even been the location of several movies. 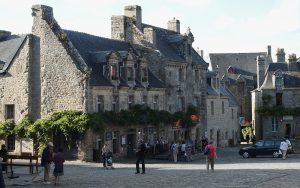 Auray, another photogenic town, awaits you with its own 600-year-old harbor. A famous visitor here was Benjamin Franklin, who landed here to seek France’s help in the American War of Independence. The lovely, historic port is well-preserved and filled with shops and restaurants. There’s also a covered fish market, a Monday open market, and walking paths.

Pont Aven is a picturesque village with the river Aven running through it, giving the impression that flowing water is everywhere. It’s best known as an artist colony, after a visit from Paul Gauguin, who established the Ecole de Pont Aven in 1888. Take a riverside walk, enjoy the flower festival and Breton festivities in early August, take a boat tour, and enjoy the peaceful beauty. 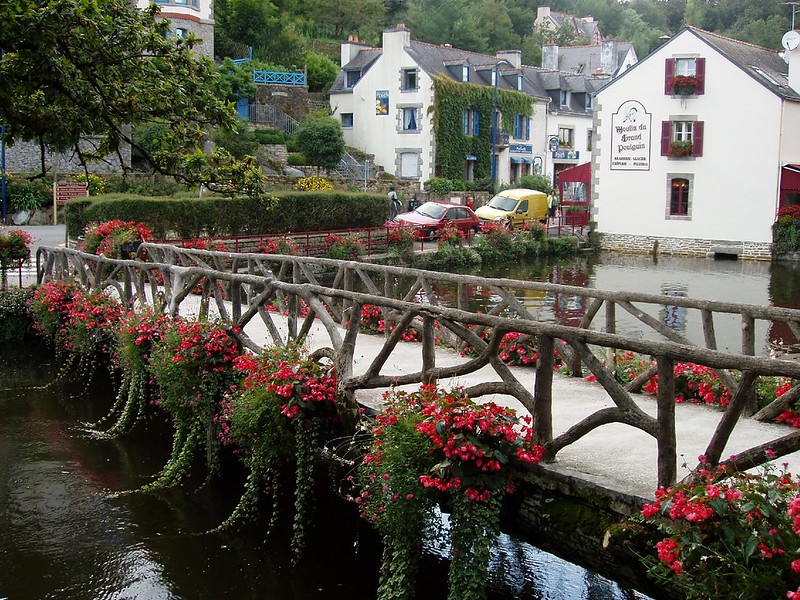 A visit to the villages of Brittany, as well as larger towns, take you off the beaten track into another time. You’ll never forget it!

Would you like to learn to speak travel French before your next trip? Check out my new online course, Real French for Travelers. In just 8 weeks, you can be operational in basic French just in time for your next trip! Courses exist for just the basics or just the continuation if you’d like a shorter course to try. Info for all on the link.