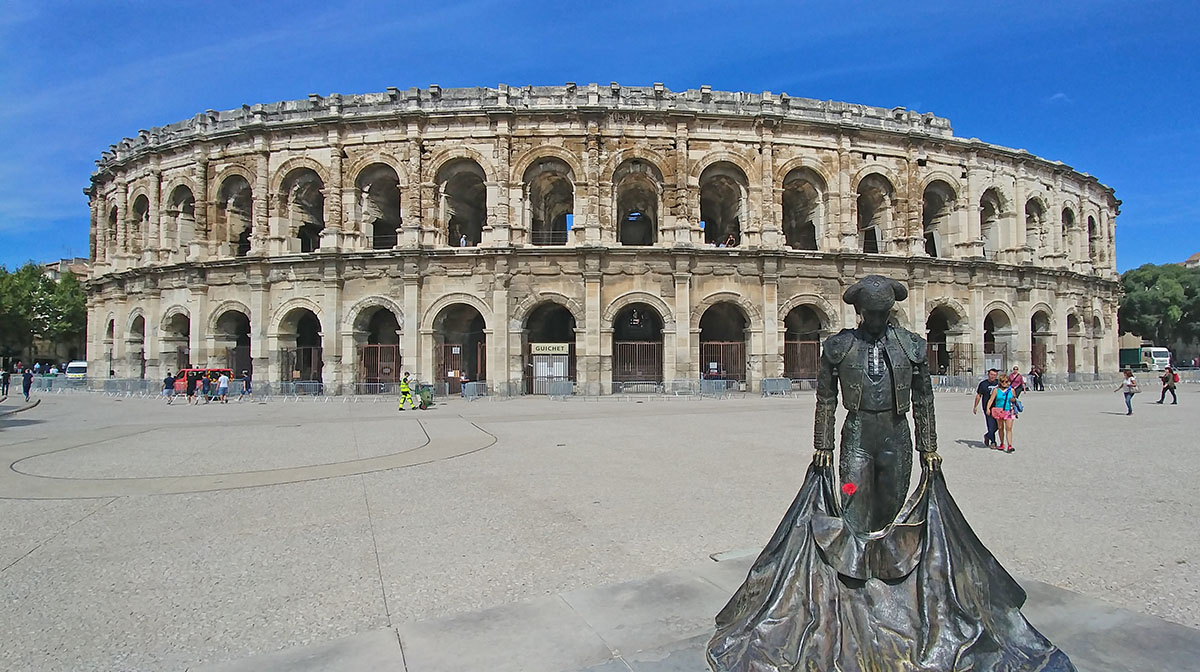 You can enjoy modern France and be intrigued by Ancient France in two towns in southern France: Nimes and Arles. They aren’t far apart, so you can satisfy your historical curiosity alongside contemporary French culture on the same trip! (It’s like visiting Rome and France at the same time!)

Nimes is a mid-sized city in the south of France close to Avignon (50 minutes drive southwest on the A9 & N100 routes). It lies in the area known as Languedoc, which borders Provence. You can combine it with a visit to Avignon and/or Arles (below) for a full dose of French charm alongside loads of history. The Roman structures are all about 2,000 years old. Nimes is home to the best-preserved Roman amphitheater (even better than the Colosseum in Rome!)

Back in the day, Nimes was home to about 60,000 people. It was an important and wealthy city with a strong Roman presence. Today, the population is about 150,000 people. 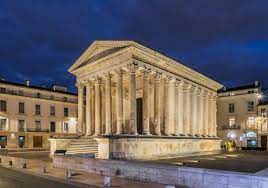 The star of the ancient attractions of Nimes is Les Arènes, the Roman arena. Currently used for concerts and bullfights (and tourism), the arena was able to seat 24,000 spectators.

Maison Carée is a temple dedicated to Gaius and Lucius Caesar, the grandsons of Emperor Agustus. They died in their youth. It is astonishing how well-preserved this structure is, despite its age.

The Temple of Diana is not as well-preserved as the two previous sites, but is interesting, nonetheless. 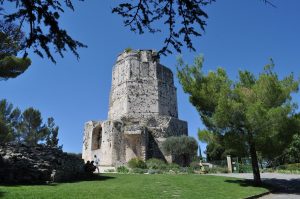 La Tour Magne from 15 BC was a watchtower that now towers over the town from its place in the Jardins de la Fontaine (below). Climb the stairs to get a great view of the city.

Roman gates: Porte Auguste has 3 arches. A smaller single-arch gate lies on the other side of the town.

Le Pont du Gard: A 3-tiered aqueduct that carried water a distance of about 30 miles. It starts about 15 miles away but ends in Nimes at the Castellum Divisorium, which looks like a round well with holes in the sides. (Drive 37 minutes northeast on the D6086 route.) 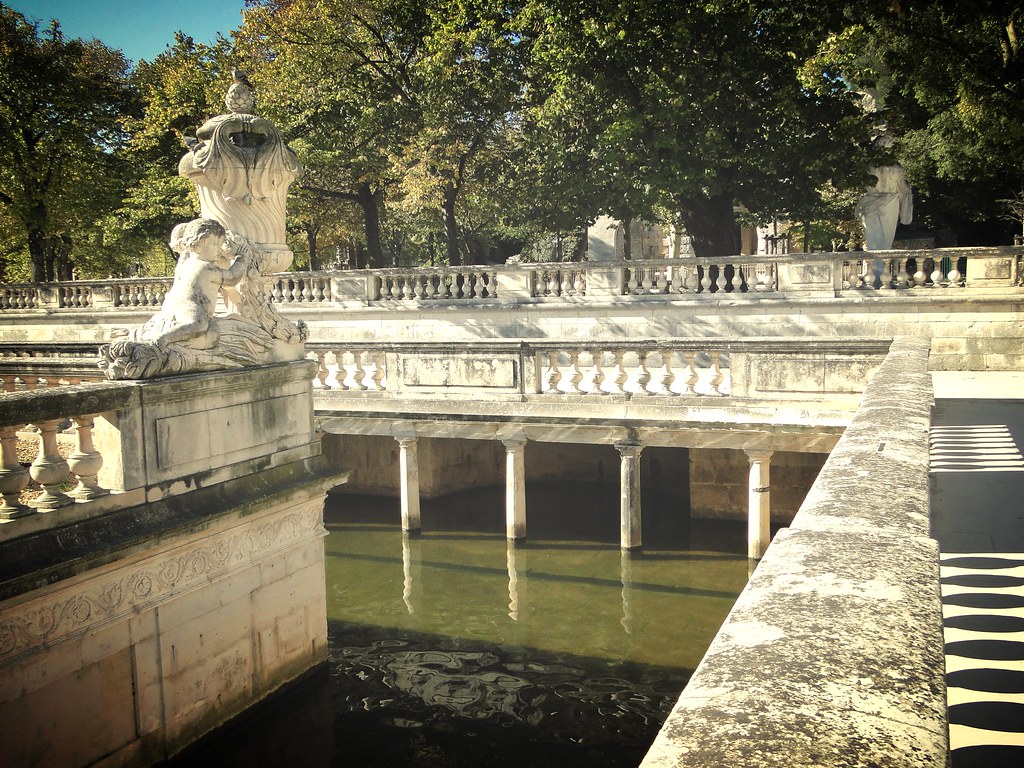 Jardins de la Fontaine: These are beautiful 18th-century fountains and gardens rivaling those at Versailles.

Musée des Beaux-Arts is the region’s 2nd largest fine arts museum, founded in 1821. Its works include those of Rubens, Delaroche, and Della Robbia. A more modern structure for art is the 9-story Carrée d’Art (near the Maison Carée), containing art treasures and a library in a sleek, modern building.

Les Halles de Nimes is a fabulous covered market where you can find not only endless offerings of fruit, vegetables, cheeses, prepared foods, and regional specialties, but you can lunch on-site at one of the food bars.

If you’d rather eat outside at a café, head to the Place Aux Herbes, for restaurants and shops.

Drive 30-40 minutes southeast of Nimes on the A54 highway to reach Arles, a smaller town yet also boasting its share of Roman antiquities.  Arles is quaint and attractive, with winding, cobbled roads, picturesque buildings, and great food.

It also has its own Roman coliseum, over 2,000 years old, an amphitheater that seats10,000 people. 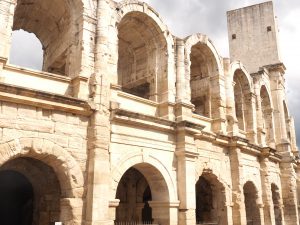 You’ll also see the Thermes de Constantin, Roman baths dating to 300 A.D. Then, there are the first-century underground Cryptoporticus tunnels, subterranean galleries of arches, and hallways used in ancient times to store perishables.

The Tourist Office schedules walking tours where you can see the places where Vincent Van Gogh painted many of his paintings while he lived here for a year.

The Cloister and Church of St. Trophimé is a Romanesque Church from the 12th century. The architecture of these two buildings is worth seeing, especially the arches and carved columns of the cloister.

Nearby, you’ll see the Place de la République, with a huge obelisk in the center. 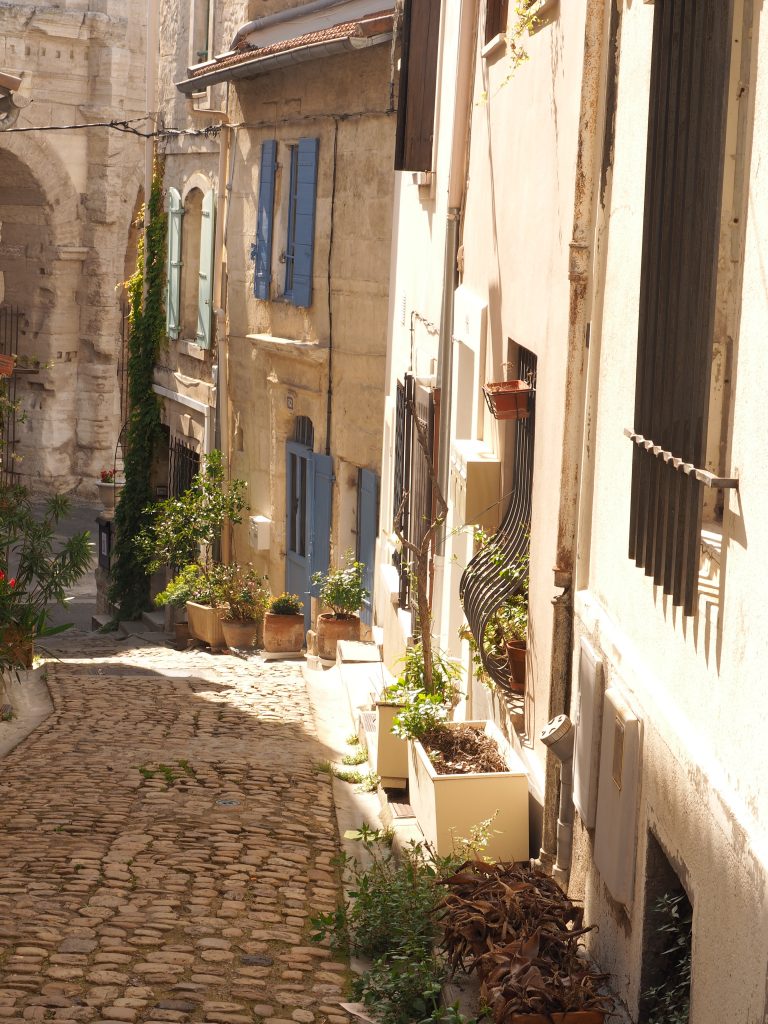 Don’t forget the central part of town with the Town Hall and the Place du Forum, a lively area full of restaurants and shops.

Nearby Arles and Nimes, visit La Camargue,   Avignon, and the lovely villages of Le Luberon, east of Avignon.