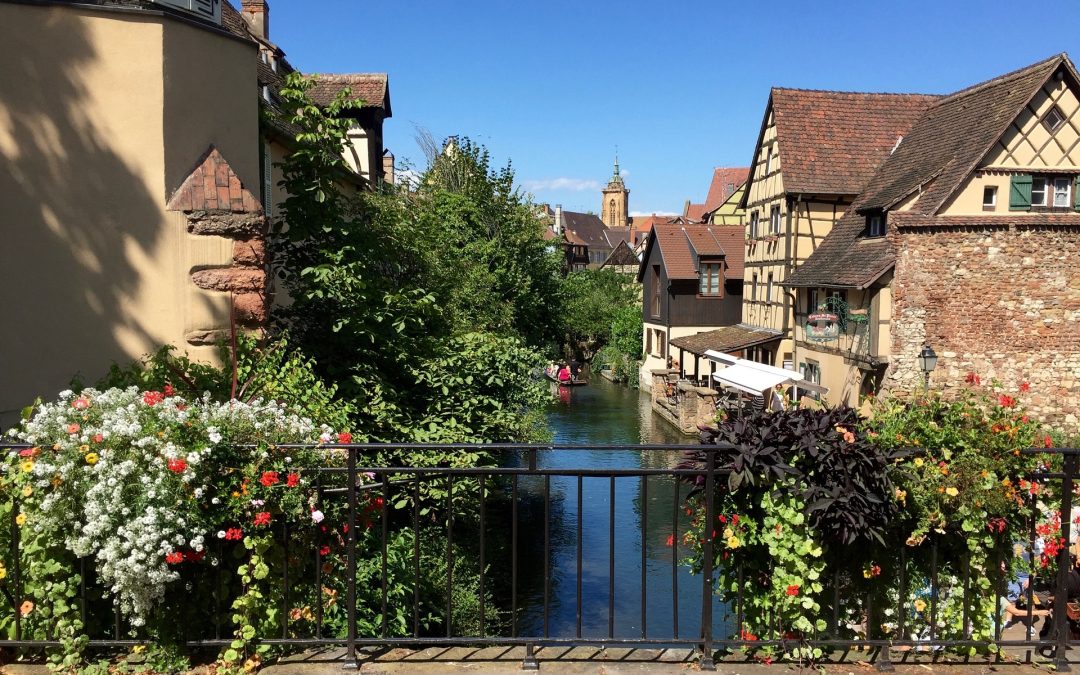 If you like wine, that’s only half the pleasure of following a wine route in of the best-known wine cultivation regions of France. The other half is all about the place itself. Medieval villages with half-timbered houses, lush vineyards and farmland, a peaceful yet memorable setting to enjoy. 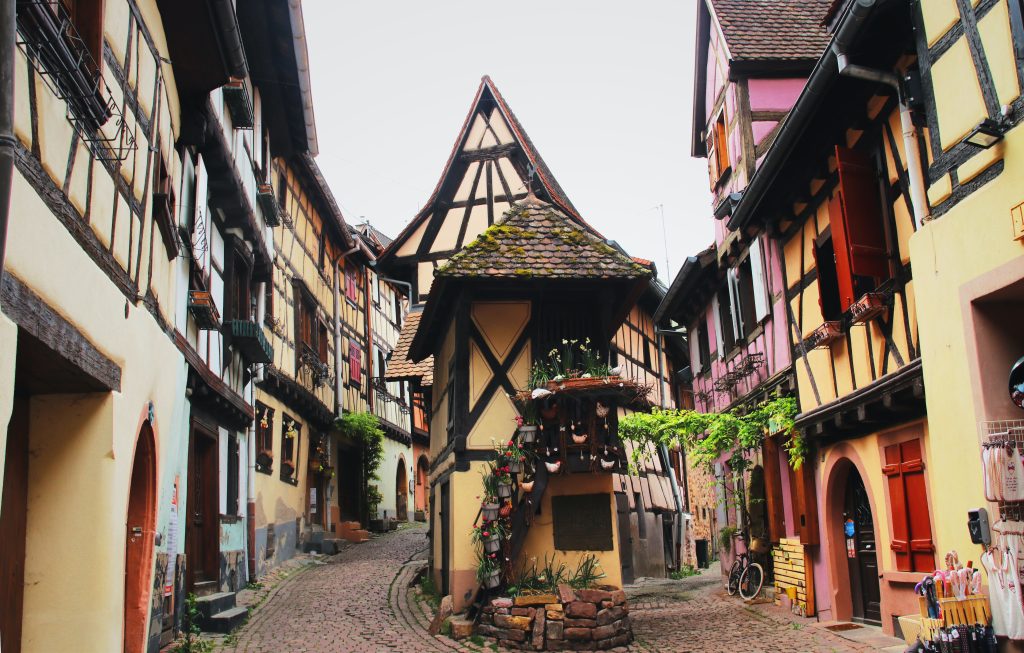 If you embark on a wine route, plan to drive from one stunning village to another as well as taste local wines. This post will focus on the Alsace wine route (and Burgundy will have its own post.)

Alsace and Burgundy are two areas that need no introduction when it comes to wine. A red burgundy with your steak, a white Riesling chilled to crisp perfection. It’s familiar, but here’s a way to go much deeper in learning and tasting. Combine it with your France vacation!

Alsatian wines have been considered somewhat undiscovered when comparing them with the popularity of Bordeaux and Burgundy wines. Yet, Alsatian wines are a treasure in themselves and are still less expensive than their famous cousins. The best-known Alsatian wines are Riesling, Pinot Gris, and Gewurztraminer.

To discover these wines in depth, the wine route of Alsace is not to be missed, either by car, organized tour, bike or on foot. Follow the well-marked wine route. The route starts in the Strasbourg region, where you’ll find Obernai and Molsheim, and continues down to Colmar (and beyond to Guebwiller and Thann near Mulhouse.)

If the names sound German, welcome to Alsace! On the other side of the nearby Rhine River is the German border. The best way to orient yourself is with a map. The north-south route is dotted with stunning landscapes and picturesque (and very colorful) towns and villages. Most of these are fairly close together, so making it a road trip is essential since you’ll visit more and drive less. (This will help you in cramming more into your vacation!) In addition, you can see some smaller villages in an hour or so, whereas other towns, like Colmar, deserve at least several hours to see everything. Or you can stay there overnight.

Here is a sample itinerary for you, from north to south. Travel into Strasbourg, the largest city in the area, and rent a car from there. Keep in mind that different people will recommend different towns to visit. You shouldn’t go wrong, though, with the following suggestions.

If you don’t have enough time to visit all of the following towns and villages, make sure you see these at a minimum: Ribeauvillé, the Château Haut-Koenigsbourg, Riquewihr, Kayersberg, Colmar, and Eguisheim. You won’t be disappointed! This area is great for biking and hiking, as well. There are special biking maps and tips available through Alsace tourist bureaus and websites.

Obernai: This is a great place to start because it’s attractive and interesting, even if you don’t care about wine. You’ll enjoy medieval buildings, like the 16th century well and 13th-century chapel, along with city walls and towers, and open markets.

Barr: This town is just a few miles south of Obernai. It’s often overlooked by tourists but is worth a visit. There are many interesting buildings to see, from the 16th to 18th centuries, as well as fountains and charming cobbled streets.

Château du Haut-Koenigsbourg: This scenic destination lies on your route between Barr and Ribeauvillé. It’s a 12th-century medieval castle with stunning views of the Alsace Plain. 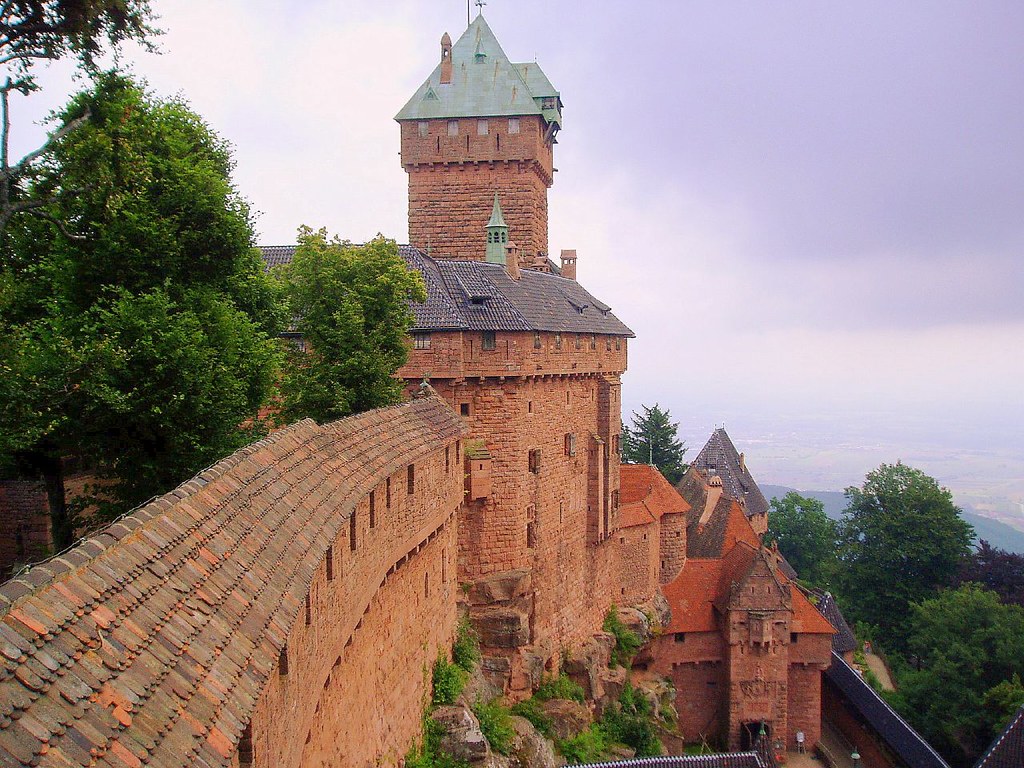 Ribeauvillé: It’s one of the oldest medieval towns in Alsace. You’ll find yourself surrounded by historic buildings dating as far back as the 15th century, medieval city walls, and picturesque Renaissance fountains on the Grande Rue.

Note: Ribeauvillé, Hunawihr, Zellenberg, and Riquewihr are a stone’s throw from one another. You can easily zip from one to the next in your rental car.

Hunawihr: Classified as one of France’s most beautiful villages, and one of the oldest, founded in the 7th century. Many of the buildings date from the 15th and 16th centuries. Two towers of a 12th-century castle remain and overlook the town. It won’t take you long to visit.

Zellenberg: This village is perched on a hill in the middle of a vineyard, making it unusual. Many of the houses are typical wine-grower homes with space for a winepress.

Riquewihr: This village is in the “most beautiful villages” list, and their wine is called the Gem of the Alsace Vineyards. You shouldn’t miss Riquewihr, with half-timbered houses, defensive city walls, and a 13th-century city gate.

Kayersberg: This town lies at the foot of the Vosges mountains. Not to be outdone, this storybook village has its own castle ruins and colorful half-timbered houses in its pedestrian center. It’s a favorite among visitors and has a reputation for fine cuisine.

Colmar: This is truly a town like a postcard from one end to the other. You have to spend longer in Colmar to take it all in. It’s the central spot in the Alsace wine region, filled with canals, flowerboxes, and medieval buildings. 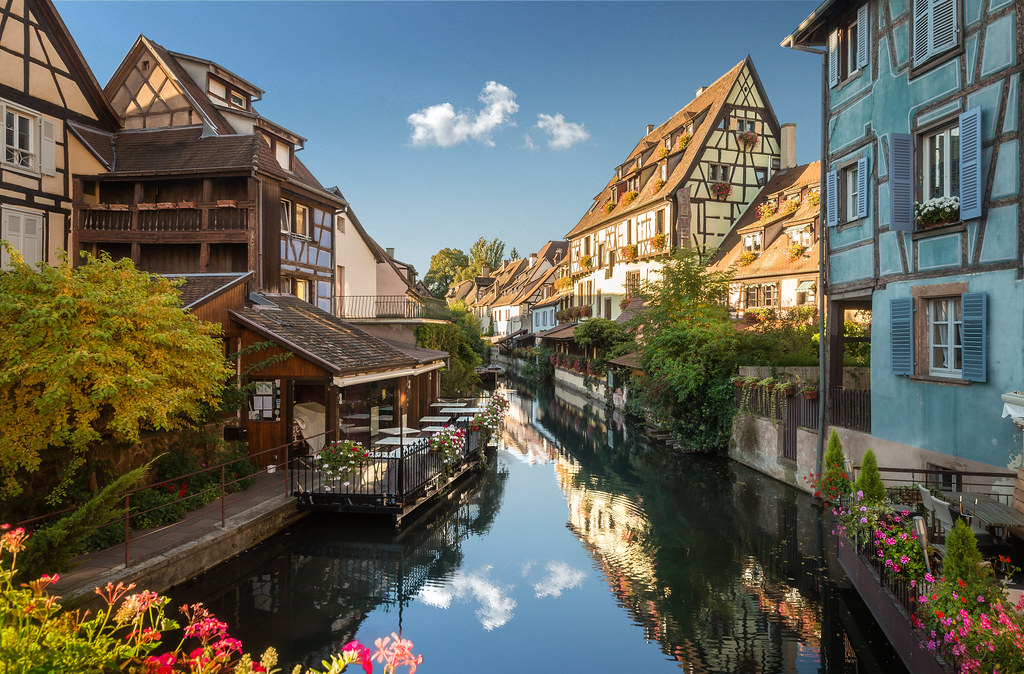 Eguisheim: Just a 13-minute drive from Colmar is Eguisheim. The village (another “most beautiful”) is organized in concentric circles around an octagonal chateau, Saint-Léon-Pfalz. It’s incredibly colorful. Allow two or three hours to visit.

If you’d like to keep going, you can drop in on the towns of Guebwiller and Thann, each with its own medieval buildings, churches, and their own wine specialties.

Recommended for overnight base: Riquewihr, Kayersberg, and/or Colmar. They are central and lovely enough to stop traveling and relax!